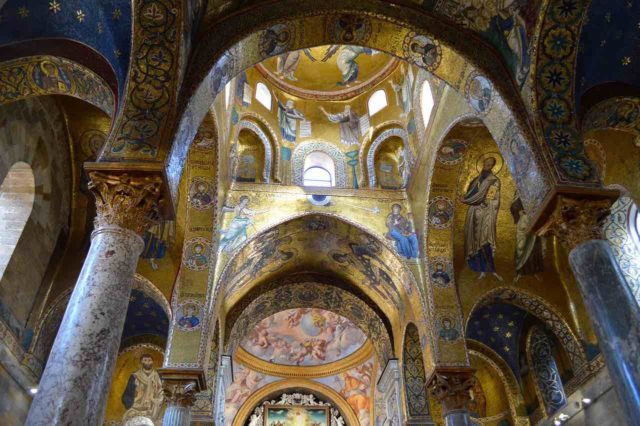 Situated in a dominant position overlooking Piazza Bellini below, the church of Santa Maria dell’Ammiraglio, also known as the “Martorana”, owes its most common name to the presence of a Benedictine monastery founded in 1193 by Goffredo and Aloisia de Marturano, to whom King Alfonso “il Magnanimo” granted the church in 1435.

Its construction (1143-1185) is due to the great Admiral of the Kingdom, Giorgio Antiocheno, as thanks for the help and protection granted him by the Blessed Virgin: the famous Admiral, wanted to assign the church to the Greek Byzantine clergy, also establishing the endowment (a fund in Misilmeri with 10 villains).
In 1282 after the revolt of Vespers, the church was the meeting place of the major barons of the Kingdom, in which they swore allegiance to Peter of Aragon who had supported the revolt against Charles of Anjou.

The current appearance, due to the additions of the Baroque period, partly eliminated by the nineteenth-century restorations carried out by engineer Giuseppe Patricolo (1870-1873), clearly reveals the contrast between the Baroque facade and the wall surface of the original Norman construction, easily recognizable by the unmistakable features of the ecclesial architecture of the Sicilian Middle Ages: the design of the arches, the ogival windows, the masonry made with rows of small ashlars well squared and the presence of the dome.

The interior, a real jewel of Byzantine art, is a Greek cross inscribed in a square, with the arms of the cross covered in barrels and the rooms on the diagonals covered by cross vaults. In the centre, four columns connected by moderately ogival arches support an octagonal drum with plumes in recessed niches, on which the hemispherical cap of the dome is set. The interior mosaic system is very precious, one of the oldest in Sicily, completed by Byzantine workers before 1151, the approximate date of the client’s death; most of it survived subsequent tampering.

The paintings that make up the mosaic decoration follow a rigorous disposition, corresponding to the liturgical program that presupposes them.
The fulcrum of the whole composition is the “Christ seated in blessing”, on the top of the dome, with the world at his feet and, distributed on the vault of the cap, four angels prostrate in the act of adoration; at the base of the dome a frieze in fir wood, discovered in 1871, bears an inscription painted in white on a turquoise background, whose text, an exceptional example of coexistence between different cultures, includes a hymn of the Byzantine liturgy (the sanctus with Hosanna and Glory) translated into Arabic, the mother tongue of George of Antioch. In the drum of the dome are eight prophets and in the niches of the angular pendentives are the four evangelists.
On the triumphal arch is represented the Annunciation, in the arches the Nativity, the Dormition of the Virgin and the Presentation in the Temple. In the barrel vaults there are saints always linked to the figure of Mary.
Of the mosaic decoration that originally adorned the wall of the porch there are only two suggestive panels that in 1538, following the destruction of the porch, were moved to the side recesses of the entrance, where you can still admire: in the right one is represented “George of Antioch at the feet of the Virgin”, which was originally placed above his tomb, next to the entrance of the sanctuary, while in the left one is the famous “coronation of Roger II”.
In the last years of the seventeenth century, the semicircular central apse was replaced by a rectangular chapel, the work of Paolo Amato, later decorated with mixed marbles and frescoes in the dome of Antonino Grano.

The magnificent nun’s choir, which replaces the original porticoed atrium built at the end of the 16th century at the behest of the abbess Eleonora of Bologna, was saved from the 19th century demolitions carried out by Patricolo and houses works by the famous Flemish painter Guglielmo Borremans, Olivio Sozzi and Giuseppe Salerno known as the “lame of Ganci”.
The polychrome flooring with mosaics and marble inlays is splendid.
Under the area of the presbytery is the ancient sepulchral crypt of the nuns, from which through an underground walkway under Piazza Bellini and Piazza Pretoria, the work of the architect Nicolò Palma in the eighteenth century, you reached a lookout over Palazzo Guggino Bordonaro, from where the nuns could enjoy the view of the Cassaro.
Recent restoration work, which lasted about two years, has brought the magnificent religious building back to life.