Piazza Marina is one of the largest squares in Palermo. It was build on the southern side of the natural harbour of the city. In the middle of the square of Piazza Marina is the beautiful Giardino Garibaldi, designed in 1863 by Giovan Battista Basile and planted with many Ficus magnolioides, which among the biggest in Europe. The garden is surrounded by an iron fence, finely decorated with animals and arrows. Inside the garden are a central fountain and many busts of important Risorgimento characters, including a monument to Giuseppe Garibaldi made by Benedetto De Lisi, one of the most known sicilian sculptors. 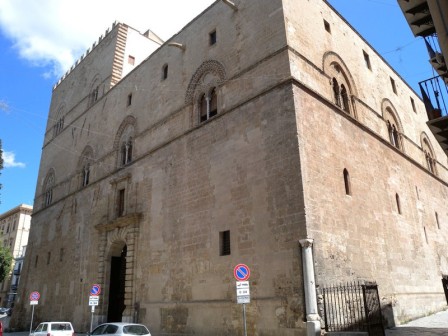 The most famous buildings of Piazza Marina is Palazzo Steri or Chiaramonte, built in 1307 by one of the most powerful families in Sicily. At that time the Chiaramonte family owned many territories all over Sicily. The other name of the palace, “Steri”, comes from the latin word Hosterium, which means fortified building. The palace was built in the Gothic style with Arab and Norman influences, but with a plain façade. The only decorations are in the portal, enriched by a double arched lintel of ashlars, and in double and triple Gothic lancet windows with multicoloured inlay.

When the new Aragonese government arrived in Palermo, in 1392, Andrea Chiaramonte was charged with treason and beheaded right in front of his palace. The Aragonese kings and the viceroys used the palace as seat of their power. In the 17th century Palazzo Chiaramonte Steri housed the Spanish Inquisition, where suspected heretics were tortured and interrogated. Later, the palace became the city court of law and now it is one of the administrative headquarters of the University of Palermo. Many tours of the palace and of the prisons are available almost every day.

On the other side of the square is the Renaissance church of Santa Maria dei Miracoli, built in 1547. On the corner of Via Vittorio Emanuele is the Fontana del Garraffo, a baroque fountain with three shellshaped basins and dolphins’ heads. In the nearest corner is the church of San Giovanni dei Napoletani, built between 1526 and 1617.