The Capuchin Catacombs of Palermo

An immense heritage unique in the world in history and scientific data is kept in the basement of Palermo. Those who visits the underground cemetery of the Capuchins is preparing to make a trip back in time and space, of course, but especially in a world that, despite the current decay in which it is immersed, is absolutely charming, mysterious and fascinating (though is not for everyone).
Along with an incredible collection of skeletons and mummies the “catacombs” of the Capuchin friars (Cappuccini in italian) preserved a huge mass of documents and valuable information that allow to reconstruct the life, history and even the costumes of the society of yesterday. A real treasure of memories, an archeology of emotions that opens the eyes of visitors and that, unfortunately, is now at risk of being lost forever.

In 1534 the Order of Friars Minor Capuchins settled in Palermo and in that same year the Senate of Palermo granted to religious privilege to build their convent next to the existing church of Santa Maria della Pace .
At that time, the dead friars were buried in a mass grave, placed in the south side of the church, never on the inside: it was impossible to keep the body of Christ in the same place where were also preserved human corpses, obviously due to putrefaction. However, at the end of the sixteenth century, a chance discovery brought about a turning point in the way those religious conceived death.
The need to empty the grave,  which has become insufficient, led to the exhumation of forty-five corpses that, with great amazement, turned miraculously free from wear and tear of time. The fact was immediately interpreted as a sign of divine intervention so, in 1599, forty of those bodies were transferred to a special grave behind the high altar of the church, and placed in niches all around the walls of the first corridor .
But soon other preserved bodies of monks who lived and died in Palermo needed to be buried, so it became necessary to build another room and a chapel. Expansions continued in the next years to meet the increasing demand for burial made by strangers, so far accepted in very exceptional cases.
At first the place was reserved exclusively for religious but, during the XVII century, nobles and supporters of the Order also began to be allowed. They were, in the vast majority of cases, members of the nobility and of the upper class, able to bear the costs of a very expensive funeral rite.
The meaning of an inhumation in the Catacombs of the Cappuccini had all the characteristics of a “status symbol” restricted to a part of the society who felt this kind of burial as a real privilege.
Despite the many royal decrees forbidding to bury the corpses into churches and convents of the city, the burials in the cemetery continued until 1881. However, even after the prohibition, in the first instance it was allowed to bury the dead, but only in temporary storage . Probably, this was a way to avoid the ban, because in many cases the dead kept temporarily ended up staying there forever.

Burial within Catacombs of the Capuchins in most cases consisted of a path marked by precise stages . At first, the bodies were laid in the so-called “colanders”, where they remained for the time needed to drain those organic liquids that would have made ​​impossible a proper storage (about a year). Then the bodies were brought in a ventilated place ready to be washed and cleaned with vinegar and water, after that the bodies were dressed and placed in  the niches along the corridors.
The natural drying, however, wasn’t the only method used for the preparation of the dead. Other systems were adopted in special cases, for example, in case of epidemics, bodies were disinfected with arsenic , or  with milk and lime; latter method then became as usual as natural drying .
Over time some techniques were improved, as an embalming method that included, as well as gutting, some special treatments with injections of chemicals that would have made the deceased look as realistic as possible .
These systems, however, aroused great concern among operators, because they were often in close contact with highly toxic substances such as arsenic and mercury. These chemicals were used until the twentieth century, when it was started to use fluids containing formaldehyde .
To these elements, the famous taxidermist from Palermo, Alfredo Salafia, added other substances, including a special mix of paraffin dissolved in ether,used to preserve the facial features 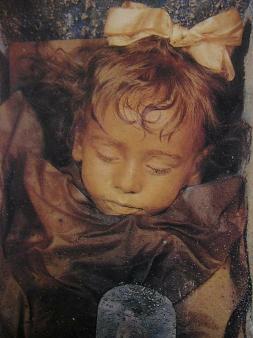 The Capuchin Catacombs preserve over eight thousand skeletons and mummified bodies of many people, famous and not, which here found rest. Among these, the partisan Giovanni Corrao (1863), the bishop Franco Agostino (1877), the painter Giuseppe Velasquez (1827), the sculptor Filippo Pennino (1794), the President of the kingdom Giuseppe Grimau (1755), the American Vice-Consul Giovanni Paterniti (1911), up to the most emblematic case , the mummy of Rosalia Lombardo, a child died of bronchopneumonia in 1920, when she was almost two years old.

“The Sleeping Beauty”, so it is called the sweet little girl with blond hair, rightly considered by many scholars , the most beautiful mummy in the world.
The body of the poor girl was transported to the cemetery of the Capuchins to be embalmed by Dr. Alfredo Salafia and then to be buried elsewhere. But the untimely death of Salafia , and because of some events that affected the family, the girl ended up staying where she still lies. For a better conservation of the small mummy, a sophisticated showcase exhibition of steel and glass was recently designed, in order to allow a continuous monitoring.

This extraordinary “museum of the dead “, has over four hundred years of history to tell us.
As long as we are willing to listen.