The Teatro Massimo Vittorio Emanuele in Palermo is the biggest opera house in Italy and the third one in Europe. The structure, built in neoclassical-eclectic style, recalls the forms of classical architecture, with its famous staircase, columns with Corinthian capitals, the porch and the large metal dome. It stands in the current Piazza Verdi, where once stood the church of the Stigmata and the monastery of San Giuliano, which were demolished at the end of the nineteenth century to make room for the majestic building. The work began in 1875 after the many controversies that followed the competition of 1864 won by the architect Giovan Battista Filippo Basile, whose death was replaced by his son Ernesto, also an architect, who, at the request of the City of Palermo, agreed to complete the work of his father.

The construction of the huge theatre was entrusted to the construction company of Giovanni Rutelli and Alberto Machì, who were already known as great experts in classical art. It was they, together with the Basile, who established that the structure should be made of carved stone, to which would then be added inserts finely carved by about 150 craftsmen. Giovanni Rutelli was also responsible for the use of a special steam crane, which proved to be essential during the work, especially in lifting the heavy blocks of stone up to 22 meters high. 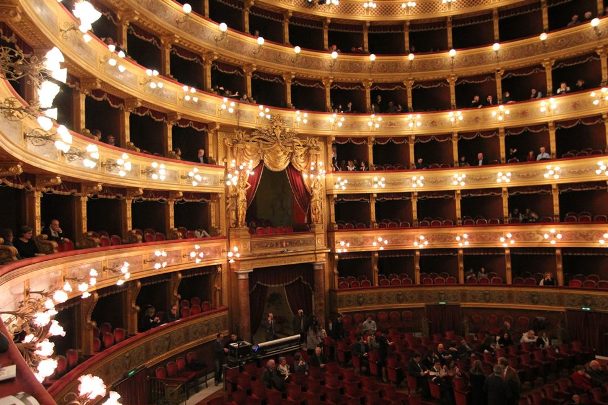 The realization of the interiors is instead due to Ernesto Basile who, as a great representative of the Art Nouveau style, undoubtedly gave his mark to the structure.
The paintings and decorations, made by great artists such as Ducrot, Lentini and Ettore De Maria Bergler, contribute to give a very special atmosphere and elegance, which the Teatro Massimo still preserves today.

The solemn inauguration took place on May 16, 1897 with the performance of Giuseppe Verdi’s Falstaff, which was attended by the first, ecstatic, 3,200 Palermo residents.

After a 23 year period of closure, due to endless restoration work, in 1997 the Teatro Massimo finally resumed its place in the Olympus of European Opera, and still represents a great attraction, as well as an important international cultural center.