Palazzo Abatellis was designed in a Catalan Gothic style by Matteo Carnalivari between 1490-1495. The building was made as a luxury villa for the magistrate and master of the harbour Francesco Abatellis and his family, who wanted a house befitting his social position.
As he didn’t have any son, when he died the palazzo was used by the nuns of the Dominican order and, after the Second World War, it became a medieval and modern art museum, after a severe restoration made to repair the damages of the bombs dropped on Palermo in 1943.

Today, the building is still housing the Sicilian Regional Gallery, which is home to some of the most famous Sicilian works of art. The Palazzo Abatellis, despite its austere façade, has a monumental and elegant doorway which leads to a wide courtyard.

The most important art pieces are:

The Triumph of the Death, a medieval fresco made by an unknown artist and formerly located in Palazzo Sclafani, another important palace in Palermo. This fresco, which depicts the death as a knight killing people with a bow, apparently inspired Pablo Picasso’s famous Guernica.

Statues by the Gagini family, made by Domenico and Antonello Gagini (father and son), who were some of the finest Sicilian artists. The most famous are Virgin and Child and Portrait of a young man.

The Laurana room, which houses some statues by Francesco Laurana, including his famous Bust of Eleonora of Aragon.

The Medieval Crucifixes, a collection of wooden crucifixes. The most famous is made by Pietro Ruzzolone, a fine painter. This one has the Crucifix on one side and Risen Christ on the reverse. 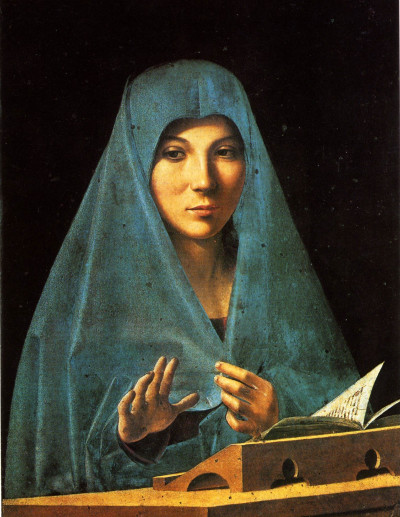 The Virgin Annunciate, this is considered the masterpiece of Antonello da Messina, one of the most important Renaissance painters in Europe. It represents a Madonna interrupted while reading by the Angel of the Annunciation (not seen in the painting).

The Malvagna Triptych, by Jan Gossaert, also known as Mabuse, is the most important work made by a foreign artist. It represents the Virgin Mary and Child with Angels and Saints.