Piazza Pretoria is located close to the Vigliena intersection known as the “Quattro Canti”, the very center of the old Palermo. The square is on a higher lever than Via Maqueda and it’s enriched by a monumental fountain in the middle, surrounded by many important buildings.

It takes its name by the city hall building, also known as Palazzo Pretorio (or Palazzo delle Aquile). 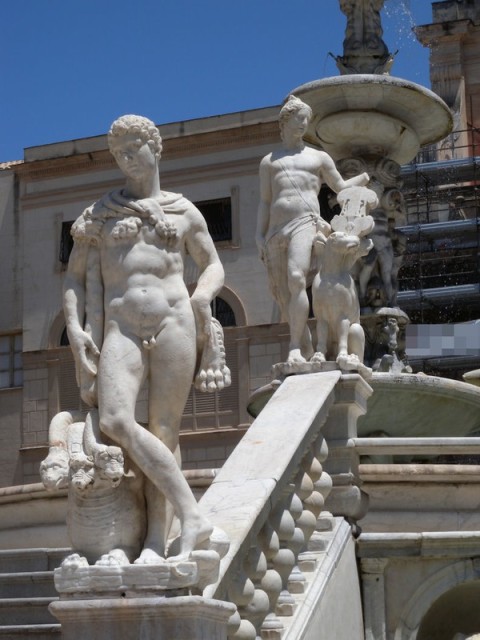 The marvelous fountain in the middle of the square, was designed in 1552 by Francesco Camilliani, a Tuscan artist. The monumental sculpture was made to enrich the garden of a Florentine villa. But before the fountain was installed, the owner of the villa died and his son decided to sell it. It was bought by the City of Palermo, divided in 644 pieces and sent to Palermo where it was finally installed in 1574.

The fountain has three concentric basins arranged on different levels. All around are statues representing monsters, mythological creatures, sirens and animal heads.
Because of the nudity of the statues, the square is also known as “Piazza della Vergogna”, the Square of Shame.

The iron fence, added in 1858, was made by the Sicilian artist Giovanni Battista Basile, one of the finest artists of the 19th century.

The Palermo city hall building has many names. It is called Palazzo Senatorio, Palazzo Pretorio or most commonly, Palazzo delle Aquile (the Eeagles’ Palace), due to the eagles decorating the exterior of the building.

This is the town hall and Palermo’s most important civic monument. A major restoration made during the 19th-century, altered the original 16th-century aspect of the building, however, a small statue of Santa Rosalia, made by Carlo Aprile in 1661, still lies in a niche on the top of the Palace’s façade.

Inside, at the entrance, an elegant staircase takes to the first floor and to the main public rooms: the Sala delle Lapidi, Sala dei Gonfaloni and Sala Rossa, which is also known as the Mayor’s Hall.

The Church of Santa Caterina d’Alessandria

This church was originally made as a part of the nearby Dominican monastery of Santa Caterina, built in the 14th-century. The church of Santa Caterina was made between 1566 and 1596 and it is a splendid example of Sicilian Baroque architecture.
The façade of the building has a monumental double stairway and a statue of Santa Caterina (St. Catherine) in the main portal (located in the nearby square).
Inside the church are many fine marbles, statues, stuccoes and frescoes. The statue of St Catherine, in the transept, was made in 1534 by Antonello Gagini, one of the most famous Sicilian sculptors of all times.

The big dome was built on the top of the building in the mid 18th century, in accord with the architectural trend of that era.