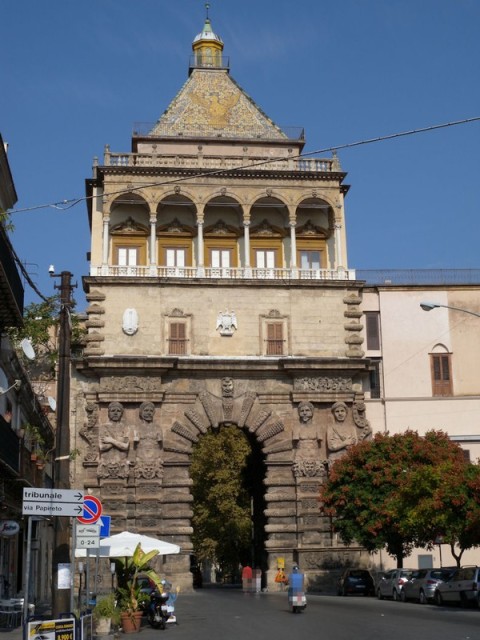 Once upon a time the city of Palermo was surrounded by walls and there were also entrance gates, the most important of which was the Porta del Palazzo.
This gate was closed perhaps in 1460 and another one was built at the end of the main road and was called the Eagle Gate, but the population immediately called it “Nuova” (New).

Charles V of Habsburg, King of Italy, King of Spain and Emperor of the Holy Roman-German Empire, came to Sicily victorious from Tunis in the autumn of 1535, after conquering the African coast of the Mediterranean and thus hitting Islam.
This victory was so important for the Sicilians that Charles V was forced to stay eight days in Monreale, more than he had expected, because so pleaded by the city of Palermo, which had wanted a whole week to prepare solemn honours to the winner of Africa.
The feast was celebrated on September 13, 1535 and under the Porta Nuova took place the official meeting of Charles V with the capital of the kingdom.
In memory of this moment, the government of Marcoantonio Colonna, viceroy of Sicily, decided to rebuild the gate, whose work began late, namely in 1583. The viceroy wanted the gate to be called “Austrian” in honor of Charles V.
But even this door, like a triumphal arch, was not very lucky.
On December 20, 1667, during a thunderstorm, a lightning bolt exploded a load of ammunition deposited in some rooms of the upper floor, causing serious damage.
The door was immediately rebuilt in 1669, in the same form, by Gaspare Guercio, architect of the senate.
It has two facades, one overlooking the old town and the other facing Monreale. 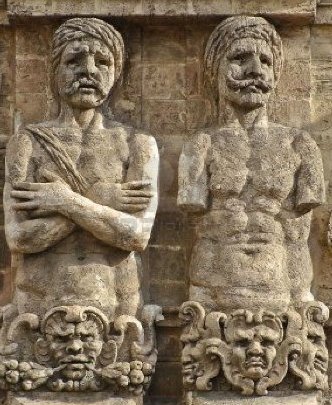 It was decorated with friezes and symbols including four defeated Turks. Two of them with their arms cut off, the arms were cut off to those accused of the crime of theft, and two with their arms crossed as a sign of submission, in memory of the African victory.
The mannerist construction is inspired by the triumphal ancient Roman monuments but also by the late Renaissance architecture with wide Mannerist influences. On the inner facade you can admire four allegorical busts of Peace, Justice, Truth, and abundance.
Above the arch you can also see the Palermo eagle and the coat of arms of Viceroy Colonna.
Looking up there is a sixteenth-century loggia and an extraordinary pyramid roof covered with colored majolica on which there is a picture of the senatorial eagle with wings spread, the symbol of the city of Palermo.
At the top there is a lantern inside which there is a room that has at a time a small dome covered with lead that ended with three copper balls, the smallest of which had an iron vane designed to indicate the blowing of the winds.
In 1578 the viceroy Marcoantonio Colonna had an open corridor built, flanked by a stone balustrade, which led from the Royal Palace to a room in the second order of Porta Nuova.