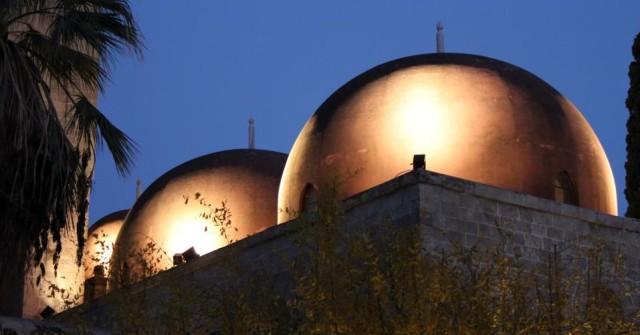 One of the most interesting examples of Sicilian-Norman art, San Giovanni degli Eremiti it is considered one of the most symbolic monuments of Palermo, one of the most fascinating and unique ecclesiastical buildings of our city, due to the the exotic charm of the red plastered domes that cover the church.
Bordering the ancient medieval walls south-west of the city, the complex of St. John of the Hermits is located near the Palace of the Normans in the stretch once lapped by the waters of the river of Bad Weather (Kemonia), one of two rivers that once crossed the city (now buried).

Church and convent of S. Giovanni degli Eremiti, according to the chronicles, were built at the behest of the first king of Sicily Roger II, an enlightened and cultured sovereign, between 1132 and 1148 on the most ancient pre-existing of different eras and entrusted to the Benedictine fathers of Montevergine.
The historian Rocco Pirri, in his “Sicilia Sacra”, relates the site to one of the Benedictine monasteries founded in the sixth century by St. Gregory the Great in the Sicilian possessions of his mother, that of St. Hermes (hence the etymology “Hermits”).
Over the centuries it seems that this place has always maintained a religious destination, in fact, during the Muslim rule of the island, there was presumably an Arab mosque.
The proximity of the monastery to the royal residence immediately made it a privileged place, also intended for the burial of high dignitaries of the Norman court: its abbot, who was also the private confessor of the king, enjoyed the title of first chaplain of the royal chapel and numerous privileges. After a long period of neglect, in 1464 the monastic complex (now devoid of religious) was assigned by Pope Paul II, at the suggestion of Cardinal Giovan Nicolò Ursino, to the Benedictine monks of San Martino delle Scale and then, in 1524 at the behest of Emperor Charles V, was granted as “Gancìa” (hospice) to the Benedictine monks of Monreale and the archbishop of that diocese for their homes (on this occasion the entire complex was profoundly transformed).
The Norman buildings (church and monastery), were built (like other buildings of the period), according to architectural models markedly Islamic (architects and workers were of Muslim origin), the result of a mediation between different artistic cultures, the eastern and Christian, which allowed the evolution of an art and architecture unique.
The church of S. Giovanni degli Eremiti, which over the centuries has undergone various changes and transformations, has a parallelepiped-shaped structure, with harmonious proportions and not too large. 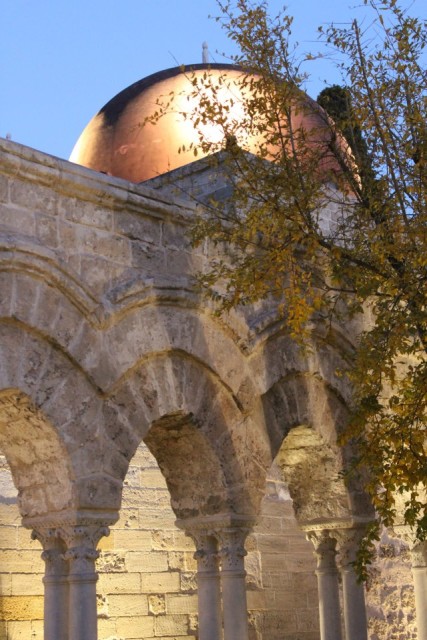 Its architecture is essentially based on geometric rigour, the wall vestments are made up of layers of small ashlars of calcarenite on the face, visible both outside and inside, perfectly squared and aligned.
The interior, of simple geometric form, is bare, very severe and unadorned in every decoration with a planimetric arrangement of a cross commissa, that is, in the shape of a T that is repeated five times: in the two large bays of the single nave and with smaller dimensions, on the room that precedes the main apse, in the diaconic and finally, to the north, on the characteristic bell tower.
The nave is composed of two large square bays separated by a mighty ogival arch and ends with a three-apsidal transept whose central apse, almost semicircular, is pronounced outside beyond the structure of the wall: only two transverse ogival arches intersperse the longitudinal space of the nave.

A decisive role is played by the light that penetrates the interior of the church, in fact for its particular conformation can calibrate effects of light and shadow without resorting to sculptural or pictorial devices, or mosaic decorations, relying mainly on a wise use of the ogival openings, which were originally covered by barriers preciously perforated in plaster, which once shielded the windows.

What remains today of the ancient Benedictine monastery is the elegant “cloister”, built later, at an unspecified date, but for construction and stylistic characteristics probably seems to have been built around the end of the thirteenth century.

Rectangular in shape, today it is almost reduced to a state of ruin, where it is still possible to admire the remains of the perimeter walls and an agile escape of twin columns (similar to those of the cloister of Monreale) with Gothic pointed arches.

It is accessed through a lush nineteenth-century Mediterranean garden (a small oasis of peace) characterized by a lush flora mainly made up of exotic plants, consisting of various types of palms, citrus fruits of various kinds, laurels, olive trees, medlars, agaves, all this vegetation and views of the church, framed by Gothic arches, give the place a special charm.

At the end of the XIX century the architect Giuseppe Patricolo, as part of a program of recovery of several Sicilian monuments, undertook a radical campaign of restoration of the entire complex aimed at restoring the alleged original appearance of the magnificent monument.

Patricolo’s interventions have freed the building from the added volumes and gradual transformations, bringing to light the remains of Islamic structures and other evidence dating back to later eras.

The architect Francesco Valenti, who was to become a famous superintendent of Sicilian monuments, worked on these restorations.

The complex of S. Giovanni degli Eremiti is one of the nine monuments included in the Arab-Norman route of Palermo, which has become a UNESCO world heritage site.

The inclusion in the list of world heritage sites to be protected of a site with such unique characteristics is a great opportunity for Palermo and for the whole of Sicily.

A great opportunity for development, cultural and economic growth of our land (not to be missed).