The Palatine Chapel was described by Guy de Maupassant as the most beautiful church in the world.

It is located inside the Norman Palace which was built in the Palaeopolis, the highest and oldest part of the city. The Palatine Chapel, which means chapel of the Palace, was commissioned by Roger II of Altavilla, the first Norman king of Sicily and was used by the latter as a private chapel in 1130. Once its exterior appearance was totally different to today. Of its original facade there is almost nothing left because it was incorporated by other more recent structures. Originally it stood isolated, the apse facing east as the Byzantine tradition dictates.

To the west you can see a Latin church divided by ten granite columns in three naves and to the east, that is, in the presbytery we can recognize a small Christian church eastern that is Byzantine square topped by a hemispherical dome, such as those seen in the East in Greece or Turkey for example. If the first impression is that of entering a normal Christian church, if we look more closely at its structure we can recognize two small churches. Even the inscriptions on the walls are in both Latin and Greek, this testifies to the fact that, in this small chapel, at the time of Roger II the two religious components were counterbalanced and that it was “officiated” in Greek and Latin. 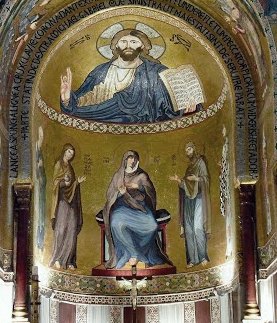 The chapel stands at a time of great creativity, when artists of different origins and sensibilities worked together and the result was a masterpiece where you can recognize the policy of tolerance adopted by Roger II. The King wants to show us that here we meet the culture of the East and the West, but not only, because if we look carefully at the floor we can see mosaics here, but not of glass but of precious stones such as porphyry for example. So the floor is Arabic and Arabic are also the stylized palmettes on the walls above which we find the Byzantine mosaics.

Byzantine mosaics are made up of two sheets of glass between which there is a very thin layer of gold. So what glitters is gold, as is the Word God.
God is light and to represent God one must use the most precious thing that exists. Norman and Byzantine Arabs worked together here thanks to the policy of tolerance adopted by Roger II. Let us remember that at the time of the Normans not everyone knew how to read and write, so Roger adopted a language that could be understood by all. Let’s think of illustrated books… here is an illustrated book for everyone, an illustrated book that tells the stories of Christ, the stories of Genesis, the history of the Old Testament, the stories of Saints Peter and Paul. 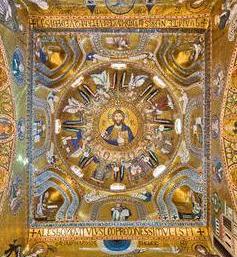 Everything has a meaning nothing has been left to chance. We see that the presbytery first has a square shape, the square represents the earth with its 4 elements: earth, water, air and fire and then we see in the drum an octagon obtained by creating these double niches at the corners; the eight represents the resurrection but also the universal judgment, indicates the unknown followed by perfection, a brilliant solution to get to the circle that is the geometric figure that has no beginning and no end and that represents God. In fact, the dome symbolizes the heavenly kingdom where Christ is supreme lord and is surrounded by archangels and angels who are his soldiers. Around the dome vie is in fact the inscription: “Heaven is my throne, earth is the stool of my feet” (Isaiah 66,1 = Acts 7,49°). In the drum are the 4 evangelists and the prophets. In the apse we see Christ Pantocrator, who is the Lord of Creation blessing us in Greek with his left hand while with his right hand he holds the book of the Bible in which it is written in Greek and Latin: “I am the light of the world, whoever follows me will not walk in darkness but will have the light of life”. Under Christ Pantocrator we see the Madonna and we immediately realize that the Madonna represented there is not original from the twelfth century. It is a Baroque Madonna, made to cover a window that no longer had its original function, that is to penetrate the first rays of the sun inside the church. But an original Madonna of the time can be seen looking up over the arch that precedes the apse, there is represented the annunciation, on the left you see the angel Gabriel and a dove with a ray of light: it is the Holy Spirit.

Interesting is the image that illustrates the separation of the land from the sea. The terrestrial globe is a water sphere with at its centre three parts of land representing the three continents then known: Europe, Africa and Asia, divided by strips of sea that form a Y, symbol of the trinity. You can also see the scene of Adam’s creation: you can see a great resemblance between the face of God and that of Adam, underlined by the Latin phrase: creavit ominem at imaginem sua.

The ceiling is unique in the world and of considerable importance and value. This is a ceiling fatimita muquarnas which means stalactites or alveoli.

This self-supporting structure is made up of very thin boards of abies nebrodensis (fir of the nebrods). What we see are 750 paintings on wood independent of each other and what is represented by artists unfortunately unknown to us but certainly coming from North Africa, is the representation of the Koranic paradise, in essence are represented all the pleasures of the senses and spirit that await believers. You can see trees, monsters, peacocks, eagles; men squatting with their legs crossed like a Muslim, generally in the act of drinking, or going hunting, pipe players, drummers, castanets and harps and dance scenes. All these scenes belong to the Islamic secular iconography, whose images symbolically represented the wish for a happy life after death. 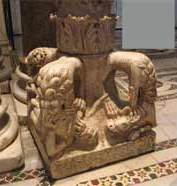 The monolithic candelabrum, four metres and twenty-six centimetres high, which can be seen on the right next to the ambo and which is still used today on Easter Day, deserves special mention; in fact, the priest reads the gospel with the light of the candle placed on it.

This sculptural masterpiece in white marble is divided into five orders and rests on four lions that bite men and beasts; the lions are the symbol of the Normans. At the hundredth of the candelabrum, Christ jumps immediately to the eye, depicted with a beard, sitting on a pillow and holding a book, at his feet the figure of a man dressed as an ecclesiastic, probably Roger II who commissioned the work.