The church of St. Chiara 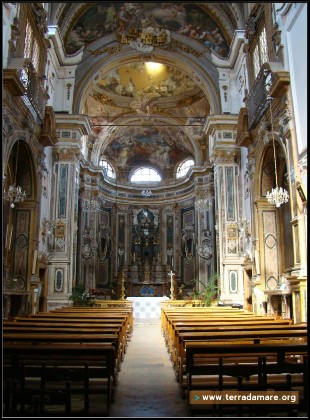 The church of St. Chiara and its convent, were built by Matteo count of Sclafani and Aderno in 1344. The structure was renewed in 1678 when the architect Giuseppe Amato decided to change the old building. Today there aren’t many marks of this late 17th century interventions, because of the 1726 earthquake, which caused serious damages to the building and the church, and because of the WWII, with the bombs that destroyed part of the façade and its splendid baroque gate, adorned with Solomonic columns.
A first modern restoration was started in 1950, by architect Gurrieri, and later again in 1984, by the Regional department of arts and culture.
From 1919 the church and the monastery are entrusted to Salesiani Fathers, who founded an orphanage and professional schools for people in need.
The church has just one nave, with four side altars and a choir. The internal decorations were made by the Sicilian architect P. Amato, with the help of some very specialized workers. In the first chapel on the right, there is the Franciscan emblem, two crossed arms on black background. Over the altar of this chapel there is a painting by Olivio Sozzi, of 1719, representing St. Chiara expelling the Saracens from the convent showing the monstrance.
Over the second altar on the right there is a panting by Gaspare Serenario, dated 1748: The Crucifixion. In the two chapels on the left there are some less precious pictures, made from 1954 to 1956. These represent some important Salesian images, the founder of the order Don Bosco, St. Joseph and Maria Ausiliatrice.
The major altar was built between 1741 and 1751 and is dedicated to the SS. Sacrament. It’s made with polychrome marbles, hard stones and golden copper.
On the walls of the choir there are two pictures, made by the Dutch painter Guglielmo Borremans: “Moncazione of S. Chiara” and “S. Francis undressing ofhis father’s wealth”. Under these paintings there are two marble figures of St. Rosalia and St. Restituta. Some more marble figures, representing St. Margareth, queen of Scotland and St. Elizabeth, queen of Portugal, are located near to the apse.
The dome was finished in 1767 and decorated by Fumagalli with frescos which symbolize a link between the Old and the New Testament. Among the various figures we can see Isaac, Noah, Esau, David, Moses and Aaron, who point out the ark among the clouds with angels and cherubs. The other part of the fresco portrays the Virgin in triumph near to God, who gives her the scepter of queen of the skies.
The theme of the new alliance is represented by the image of Christ who gives the keys to St. Peter, and indicates him the church, portrayed as a woman wearing a tiara and the papal calyx.

Thanks to Terradamare for providing us their guides.